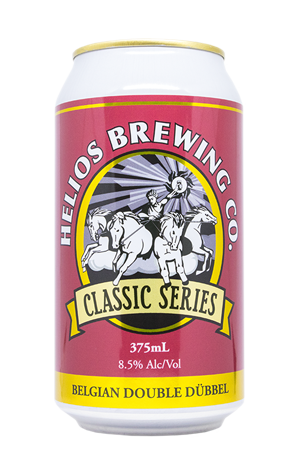 Helios have kicked off their Classic Series with a can design that wouldn’t look out of place next to old Carlton Draught tinnies. But the stuff within is half a world away from an Aussie lager - a Belgian dubbel.

“I love brewing traditional,” says brewer Charlie Hodgson. “I love brewing history… It’s important for me to maintain the integrity of the past several decades and centuries of what’s gone before me.”

Charlie actually dubbed this beer a "double dübbel", since the excitable Belgian yeast ate up more of the sugars than he expected, which resulted in a higher ABV than originally planned. While the beer still has that burnt caramel, honey-looking hue that you expect from a dubbel, along with sweet candy and fruity esters on the nose, the experience on the tongue is a bit different - as Charlie puts it, “a little bit drier, palate’s a little bit cleaner, cuts in a little bit earlier, drags a little bit longer.”

Along with the warming booze heat, this makes it sit somewhere between a Belgian dubbel and a tumbler of dry gin. Pair with some creamy cheese and chocolate, and it’ll cut through them like it’s nobody’s business.

NB: As part of our ten year anniversary series we looked at how classic styles had been lost in the race for new flavours. Don't we look daft now given a flurry of classic Belgians have since come our way...