Beer Hargreaves Hill Pursuit Of Hoppiness No.6 & No.7 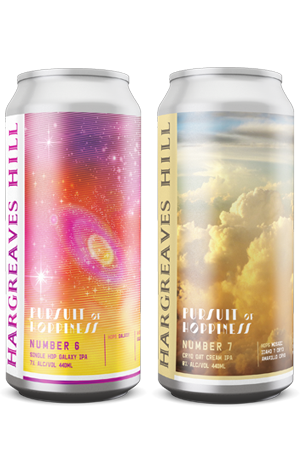 It would appear Hargreaves Hill's Pursuit Of Hoppiness is accelerating; how else to explain the dropping of not one but two of their one-time-only celebrations of hops? Both feature 20 grams of hops per litre of beer: one is a homegrown showcase, the other puts US varieties to work (while both have me thinking of early tracks by The Orb...).

No.6 in the series is the Single Hop Galaxy IPA, which in its uber-pale appearance looks like a Belgian witbier yet is so chock full of Galaxy there’s even texture to the aroma. The familiar passionfruit and peach you come to expect from the hop are there, but there's also a Juicy Fruits gum thing going on. And, with a small amount of Galaxy added in the whirlpool (which is early by today's standards) a grippy bitterness awaits you too, not to mention a lively, fruity tang.

The label of that first beer brought to mind A Huge Ever Growing Pulsating Brain That Rules From The Centre Of The Ultraworld, as much as anything because the label for no.7 – the Cryo Oat Cream IPA – is very much Little Fluffy Clouds. It's an appropriate choice too as, while the brewers have wisely kept the "cream" (lactose) additions restrained and the beer thus far from a sweet, sticky thing, it is undoubtedly soft, full and rounded on the palate. Mosaic’s blackcurrant/berry side is the first to catch the eye, with Idaho 7 and Amarillo contributing to what's a lively summer fruit salad character and very possibly the best Pursuit Of Hoppiness to date. Lucky number seven indeed.