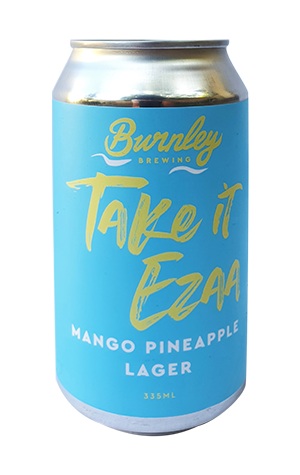 Just what would Michael Stanzel’s former teachers think of him now? There they are, the German brewers who taught him the intricacies involved in brewing subtle, crisp, classic lagers. And here he is, head brewer at Burnley Brewing and launching a lager series in a pastel-coloured can, complete with a pun and not one but two tropical fruits thrown in. German Purity Law be damned.

That’s not to say Take It Ezaa isn’t still grounded in brewing tradition, for the mango and pineapple lager is still incredibly crisp. Unlike many kettle sours in which the fruit additions drive flavour, here the mango and pineapple are presented in largely restrained fashion to keep the beer well-defined and, in some ways, still in the classic lager camp. Even if Michael’s brewing instructors may well disagree.