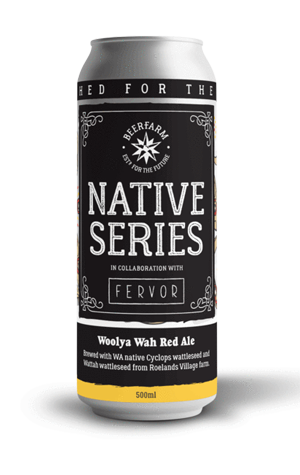 Beerfarm and Fervor have notched up seven releases in their Native Series with Woolya Wah, a beer infused with Western Australian cyclops wattleseeds (Acacia cyclops) and Wattah wattle (Acacia decurrens). They've been added to a malt-driven red ale brewed with an array of specialty malts, Ahtanum hops and a generous addition of the two wattleseed varieties, grown locally in WA at Roelands Village.

Woolya Wah is purposefully robust; designed to showcase and integrate the unique character of the WA grown Wattleseeds that were carefully toasted before being utilised in the boil, thus allowing their earthy and nutty flavours to develop. Carared, chocolate malt and dark wheat, among others, lend a dark ruby colour and some viscosity, as well as subtle toffee and rich caramel flavours, to a beer in which the hops contribute complementary aniseed aromas and a generous but balanced bitterness.

Woolya Wah is a well brewed specialty ale that also helps to bring awareness to indigenous culture and history in Australia. It is respectfully brewed and profits from its sale go towards supporting indigenous communities in WA. The Native Series beers usually disappear fast and their reach grows stronger with each release.

On tap at Beerfarm

And at select stockists