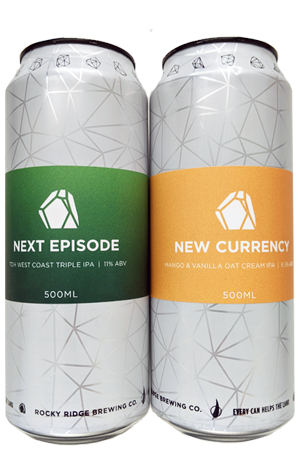 This limited pair join a new series of large format, big on booze and increasingly sought-after releases from Rocky Ridge. It's a series that recently included one of the most opulent WA beers released this year – Impossible View, a maple bourbon barrel-aged quad with vanilla and dates clocking in at 11 percent ABV. Yes, excess seems to be the intent here.

And why not? For every crushable, seemingly forward in every sense West Coast IPA, doesn’t everyone want to really be enjoying a double digit ABV, skull-numbing, unrestrained version?? Well, Rocky Ridge think so if Next Episode is anything to go by; head brewer Ross Terlick's first response was: “Next Episode is my jam!”, followed by “It's probably my favourite beer that we’ve brewed this year” – a fine insight into the future of this series if anyone was in doubt. So, if a massive West Coast IPA with a regime of hop additions including CTZ, Centennial, Citra, Kohatu and Motueka, then more Kohatu and Motueka and then more Citra for good measure, sounds like your jam, then you’re likely at one with Ross, and probably shouldn’t be operating anything more complicated than a toaster right now.

Then again, if you’ve being playing along with the ridiculous indulgence theme, all of the above can be enjoyed with a more sensible, 8.5 percent ABV dessert tipple. New Currency, typed out as New Money more than once in drafts for this, shows more balance than one expects. Plump, fresh mango drips throughout with vanilla appearing more as it warms, and, while creamy, it’s not onerously so, something the textural fruit grip attends to, preventing things rushing blindly towards a lactose saccharine head spin.

Available from the Rocky Ridge cellar door and online

And in super limited release from WA stockists