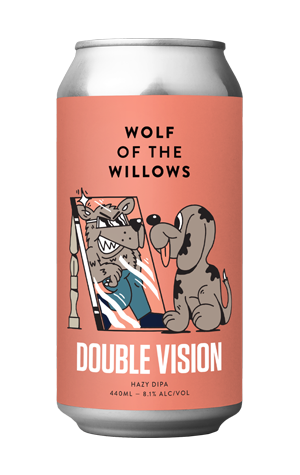 I'm not sure 2020 has been characterised by double vision as much as it has the one single vision over and over again, at least for those living in Melbourne. It's been as challenging a year as you could imagine, and among those for whom the roller coaster has thrown up some serious twists, turns and nosedives is the team at Wolf of the Willows. As March approached, they were all set to open their brewery venue and were busy signing up staff; here we are in October and they're still awaiting the day they can welcome their first guest.

Still, if the tone of the message at the end of their last mail out to supporters is anything to go by, they're pulling through and keen to bring everyone with them. If they plan to do so with Double Vision – another beer with a fun label from Digable Goods – as the liquid of choice, there might be a few sore heads afterwards.

It's a DIPA with a great depth to its glowing yellow haze in which double dry-hopped lashings of Galaxy, Vic Secret and Citra come across like tropical fruits in a blender, with a soft, oats-embellished sweetness rounding out the aroma. There’s a textural liveliness on the palate and some grippy bitterness poking through the juice, and considering this is a brewery that doesn’t typically play in the hazy or double IPA departments, they've delivered a box-ticker with bite.