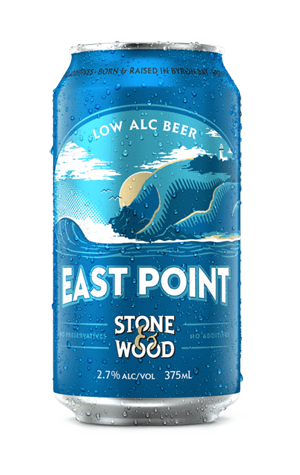 The past few years have seen mid-strengths become mainstays in many a brewery's lineup, with the growing popularity of fruity sours, which often sit in that sub-4 percent ABV space, giving drinkers wanting to keep a lid on things more options than ever before. What's more, as 2020 has progressed, despite it being the sort of year that might drive you to pick up the strongest drink in the fridge, we've seen non-alcoholic beers become very much part of the landscape. But what about the space in between: light beers?

They remain few and far between, but the team at Stone & Wood clearly feel the time is right as they bring East Point to market: a 2.7 percent offering they're backing to take off over summer. It's not merely a light, hoppy refresher with a few more percentage points chipped off either; in fact, it combines the two sectors with which we opened this piece: lower alcohol and sourness.

Pale gold and hazy in the glass, it might look a little like the brewery's flagship Pacific Ale, yet in character it's rather different. The spiel goes that it's inspired by the salt spray at Australia's most easterly point and that saltiness and a gently souring tang are what first arrest your attention. There's some soft lemon citrusy hops at play in what's probably closest to a gose in nature, but it's the acidity on the palate that really brings the refreshment, creating a spritzy feel and aiding a crisp, dry finish.

While it might be different in character to the beer that helped build Stone & Wood, I reckon you can draw a line between the two. Just as Pacific Ale brought something new to the Aussie beer world: lighter and more aromatic than any pale or golden ales doing the rounds, and arguably paving the way for XPAs, this brings something new too; still light and refreshing, but reflecting how tastes have changed in the twelve years since Pacific launched as Draught Ale. Let's see if it can have anything like the same impact.