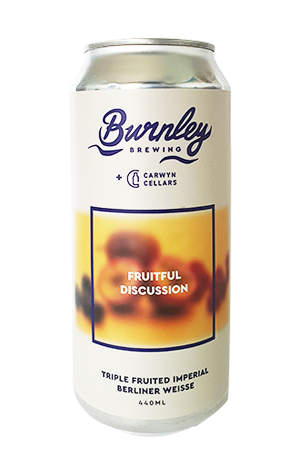 They sure do like throwing fruit into beer at Burnley Brewing. 2020 has seen them release beers with mango, pineapple, peach, banana, blackcurrant, strawberry, blueberry, raspberry, passionfruit and blackberry and the last five of those were in just one sour. In October, the brewery teamed up with one of Melbourne’s top good beer haunts, Carwyn Cellars, and headed back into the fields for Fruitful Discussion, a triple-fruited imperial Berliner Weisse.

Those three fruits are raspberry, blueberry and passionfruit and, given it registers no less than 7 percent ABV, it’s got a smooth and thicker mouthfeel than some of Burnley’s recent sours; and unlike Blackcurrant Gose, it’s not quite as enamel-strippingly sour. Instead, it’s softly tart and incredibly juicy, pours an opaque orange, and the triumvirate of fruits blends together so refreshingly you need to check yourself and remember just how much booze lies within.