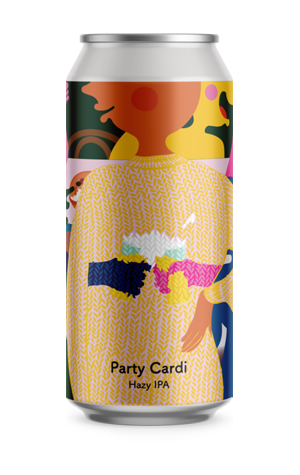 For this addition to their burgeoning collection of beer world collabs, Blackhearts & Sparrows didn't venture too far from their Fitzroy HQ. They invited Tallboy & Moose to work with them on a hazy IPA, with Party Cardi stepping up the liveliness of the Preston brewer's bold approach to label artwork another notch.

Since they settled in as a permanent fixture in craft beer circles, the trend kicked off by NEIPAs has broadened into a wider collection of IPAs under the "hazy" banner. One of the good things about that is brewers seem to have felt less pressure to ensure their beers are visually stodgy, and Party Cardi is definitely on milder end when it comes to haze; indeed, it’s a less showy hazy than many doing the rounds. It has that familiar pan-fruitbowl aroma, albeit quite subdued, with German Huell Melon and American Cashmere hops at play. There’s a sharp wee herbal tickle in its midst too, one that reminds me of the onion weed growing along my nearby creek.

And other Blackhearts stores