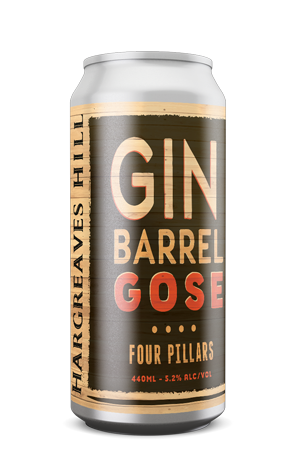 It might not command the headlines of, say, Boatrocker and Starward's annual Ramjet release, but Hargreaves Hill's ongoing partnership with Yarra Valley neighbours Four Pillars is another example of Victorian producers working together to create beers that capture elements of both collaborators. The first appearance of the Gin Barrel Gose saw it land in our Best New Victorian Beers for that year, and here it returns with a tweak yet still as enjoyable.

The liquid spent time in Christmas Gin barrels, when in previous years they've used those from the distiller's Rare Dry Gin; as a little background, the Christmas variant features actual Christmas puddings distilled with a base of juniper, cinnamon, star anise, coriander seed and Angelica. Don't go expecting a move into sweeter, heavier, dark fruit territory, however. This remains a light and lifted affair in which the botanicals-derived perfume works with the base beer to deliver a lemongrass-like herbaceousness. There's not much in the way of sourness or acidity or oak, with each contributing factor seemingly served with a delicate touch, leaving you with a slips-down-easy session beer for those who like things a little left of centre.