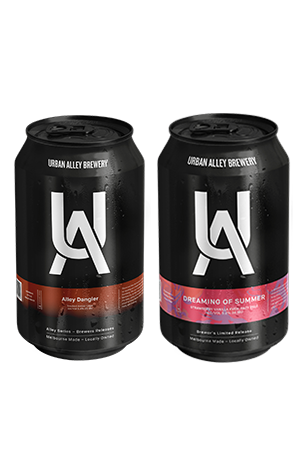 Following on from the prior releases, Man-Goes Nowhere and Long Beach Dreamsicle, it looks like the team at Urban Alley still wishes they were elsewhere (and who can blame them) as Melbourne’s lockdown rumbles on like a question from Peta Credlin. The returning Alley Dangler, first brewed in March 2020, aims to transport us to the German town of Bamberg and the rauchbiers upon which this smoked amber lager is closely modelled. Using Australian wood-smoked malt, it’s impressive just how closely the beer resembles bacon, or more specifically to my mind, cheese and bacon Shapes. But it’s not all crisps to Alley Dangler; there’s also a slight herbal note and a richness to the beer’s malt body that make it a warm welcome to Bamberg.

From the Reinheitsgebot to the milk bar, Dreaming Of Summer is a strawberry and vanilla hazy pale ale fermented with kveik that’s been dry-hopped with Mosaic and Sultana. It looks a little like mango purée, with a pinky hue and, while the strawberry, vanilla and tropical notes from the hops hit the olfactory system quickly, they disappear just as fast on drinking. That’s in no way a criticism, for despite the added adjuncts and use of kveik, it’s still a 5.2 percent pale ale you could order by the pint.