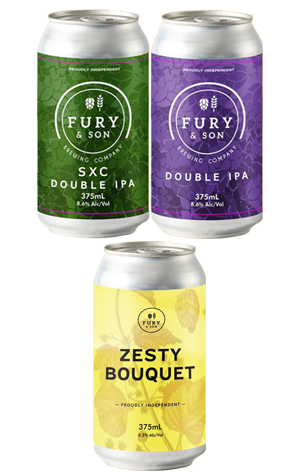 Fury & Son have made a habit of spinning two beers from one concept as 2020 has progressed, and they're at it again with a double whammy of double IPAs. The reappearance of their Double IPA will be familiar to those who've sampled past releases: sure, there's plenty of piney, citrusy hops at play but, as with DIPAs out of the US way back when, the specialty malts contribute layers of dark caramel too.

Its stablemate, SXC, stands apart in delivering a more potent punch on the hop front. The title refers to the use of Simcoe and Centennial hops – crammed into a paler base beer which allows them to come atcha less encumbered by sweetness. Pale golden and lightly hazy, SXC is much more West Coast in character: lean, dry, bitter AF, and with grapefruit rind and pine to the fore. There's no softening of the edges for Twenties tastes; this is a palate-ripping, old school sucker punch.

If the above are beers that sit a couple of degrees from each other in the great sphere of beer, Zesty Bouquet sits somewhere else entirely. Indeed, it manages to do something that's ever harder these days and serve up an experience different to pretty much everything else on the market. Grapefruit, lemon and orange zest go to work in a farmhouse ale base with an intensity that brings to mind lemon jus swirled with squeezed citrus rind and lemon myrtle. There's a drying, herbal finish cutting through what's a pretty full-bodied and slick golden drop; more cocktail than beer, they even suggest mixing it with Aperol.