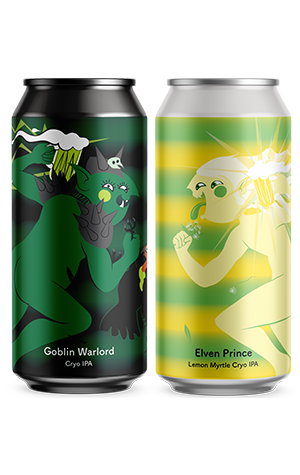 For Tallboy and Moose’s twin October releases, the Preston brewpub is back exploring Cryo hops but this time around, they're facing a battle of good versus evil in the fantasy realm. We can’t provide any help on how to defeat goblins or ghouls but if you'd like to know more about Cryo hops and the flower itself, take a look at our recent story exploring all things hops.

Back to the beers at hand, first up there’s the Goblin Warlord, a “dungeon boss” version of their original Cryo IPA, Goblinoid. This time around the booze is a little bigger at 7.5 percent ABV and it's hopped up with Cryo Amarillo, Chinook and Mosaic. The boss pours cloudy and pale yellow and has an incredibly creamy mouthfeel, while providing lashings of citrus, very ripe mango and a dank piney finish.

Proving there are good guys in Cryo-land too, Elven Prince is made with Australian hops, plus Cryo Cashmere and some additional lemon myrtle. That herb provides only a light touch but being that lemon myrtle can be quite a distinct flavour, it does stand out while joining an otherwise passionfruit and mango-filled IPA that's got that same creamy texture found in Goblin Warlord to make it seem that if the two were to meet in battle, they would indeed be equal adversaries.