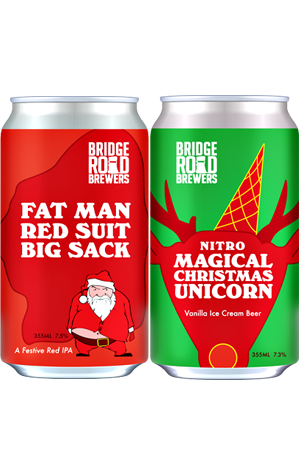 Tis the season to be jolly, COVID's defeated, you can go on holiday. (Look, it almost rhymes and it's early, OK?) Which in Bridge Road's world means the launch of the Christmas advent calendars they pioneered in Australia, plus the return of two seasonal beers.

Fat Man, Red Suit, Big Sack makes a first appearance in cans, in which you'll find a red IPA that's all about the specialty malts – clotted cream toffee, syrup sponge cake batter, toasted brittle, caramel tart. That's not to say it’s not hopped to IPA levels as the bitterness is pronounced, doing its best to bring the sweetness back to earth, and there’s a kind of stewed berry and orange rind fruitiness smothered in its midst. More amber than red as if Mrs Claus washed the suit at too high a temperature†, it's rich, sticky, full of body, hearty to the point it feels bigger than it is, and with a presence that lingers like the gifts under the tree – a fitting representation of the fat man himself.

When it comes to Magical Christmas Unicorn, things are rather simpler. There's tonnes of creamy vanilla on the nose, a coating of vanilla nougat on the palate, and some sweet butter biscuits as a backdrop. If that doesn't sound dessert like enough, it comes with added creaminess courtesy of a nitro injection.

† We’re only suggesting she's doing the washing based on the old fashioned relationship dynamics displayed by the couple in many a Christmas movie – he probably sends it away to be cleaned now.