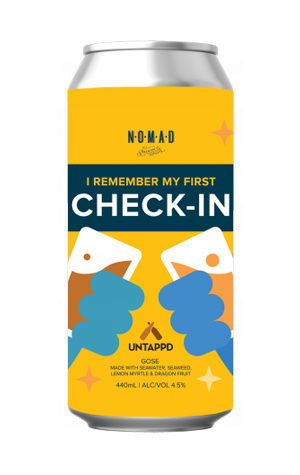 For their tenth birthday, Untappd partnered with Dogfish Head to launch a project that celebrates the global craft beer community. They called on brewers to start with a sour beer base (recipe designed by Dogfish Head), and “put their own spin on the recipe by looking to local farmers and purveyors in their area”.

As seasoned veterans in the international collaboration game – as well as people who love throwing weird stuff into beer, and with their own connection to Dogfish founder Sam Calagione – Nomad jumped at the chance to take part. Harking back to their Freshie Salt & Pepper Gose, they made their version of the beer using seawater and seaweed from their nearby beaches, and local lemon myrtle and dragonfruit.

The beer sits radiant in the glass, glowing somewhere between 80s neon pink and fire engine red, and smells as exciting as it looks. Sweet, rosy Turkish Delight wafts into the nose wrapped in lemon myrtle. That floral character translates into the glass, but with the salt taking the edge off the sweetness to give a lighter, more balanced taste. (The seaweed doesn’t really make it to the palate, but I’m personally OK with that.)

It's like drinking flower juice in a fairy garden while you're still tasting salt from your morning surf at Freshwater Beach. And we’d expect nothing less from Nomad.