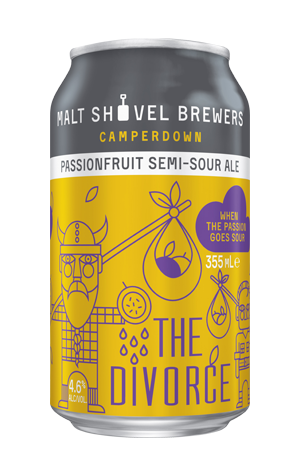 When two of the Malt Shovel brewers (Rich and Haydo, for those following the Malt Shovel Brewers story) worked together on a recipe for a passionfruit sour, they brought a delightful pun to life. The beer was called The Divorce, with the tagline: When the passion goes sour. Chuckle.

Of course, dwelling on divorce could bring up bad associations for some, so perhaps we could point out that passionfruit wasn’t named for "passion" in the romantic sense, but "passion" in the religious sense, and was named by Spanish Catholic missionaries to Brazil who used the flowers of the vine as a religious teaching aid three hundred years ago.

Or we could move on from an emotionally uncomfortable subject, avoid heading deeper down the rabbit hole of the etymology and history of words – coughlanguagenerdherecough – and simply enjoy this ridiculously easy-drinking sour.

At first, the passionfruit aroma wafting off the bright white foam may promise to be the only one for you, but if you keep your options open you’ll lay eyes (read: nose) on rich citrus notes from the Galaxy hops. In the mouth, a gentle and clean sourness mingles with a light sweetness – a marriage of convenience that is far more pleasant than the beer’s name may imply.