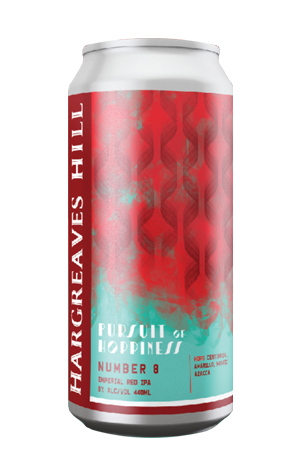 When you're told a new beer is based upon the same malt bill as one of the heartiest imperial red ales released each year in Australia, then read the label and discover the brewers have also added hops at various points in the process at levels reasonably described as copious, you might reasonably expect your palate is about to embark on an experience akin to that of the Light Brigade being sent into the so-called "Valley of Death". Yet, for all that the eighth entry in Hargreaves Hill's Pursuit of Hoppiness series has plenty of specialty malts at play – toffee, biscuit, fruitcake – this imperial red IPA in no way lays waste to your taste buds.

Instead, the hops within this russet coloured-beer – Centennial, Amarillo, Mosaic and Azacca – somehow make it all feel far lighter than its 8 percent ABV. They also manage to sneak some red berry and dark citrus flavours in, as well as contributing a broad blanket of bitterness.

All in all, it's a case of piling everything up while still maintaining harmony. This series is really hitting its straps; no need for courts-martial here.