Beer Wolf of the Willows & The Gospel Persistence 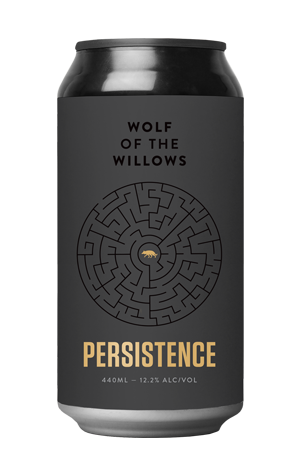 Resilience is a word that's been bandied about a lot in 2020, along with pivot, unprecedented and oh, for fuck's sake (OK, that last one is a phrase rather than a word, but you catch my drift). You have to feel that, as we in Australia look to be coming out of the darkness and into the light, persistence deserves a guernsey too. Particularly for people and businesses in Melbourne, where they've endured two lockdowns like champions (well, aside from Murdoch's goons and their ilk) and can now look forward to a summer of reclaimed glory.

Among those who've been doing it tough are the folks at Wolf of the Willows; they were set to open their taproom in March and here we are, eight months on, and they're only just about to do so. As the big day nears, they've launched another beer in their Barrel Exchange Project, this time with Melbourne's The Gospel distillery. Where their Lark collabs have featured an imperial smoked porter as the starting point, here it's a rye imperial stout that spent six months in their Rye Whiskey Solera barrels, which have since returned to the distillery to finish a whiskey set for release in 2021.

So, you're starting out with a beer already richer and fuller in nature than the JSP, and allowing a rye whiskey to go to work on it, which means you get a 12.2 percent ABV dark beer of a sweeter, fuller nature than its predecessors – the most unleashed beer in the series to date. It's rich to the point of voluptuous, with some juicy, spicy whisky character adding to the dark, vaguely bitter chocolate fudge and fruity espresso. Earthy hops add a drying edge to a full yet far from sludgy body, while there's a gentle warmth and heaps of indulgent pleasure to be had.

I cracked mine at the end of a bloody long, hard day, one for which persistence was most certainly required, and Persistence most heartily enjoyed.

Wolf of the Willows online