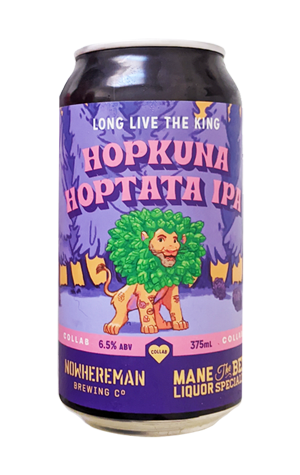 While many are talking about the fragmentation of beer styles, some with increasingly parodic nomenclature, there’s also the name to contend with. What seems humorous, and a little cute here, actually starts making a whole lotta sense when linking Mane Liquor and manes, especially once you realise Studio Papa’s artwork features a big cat version of Mane’s Josh Daley, complete with matching tattoos.

It’s a creative concept but what the collaborators didn’t do was create a cocktail of adjuncts, hype and genre-bending fermentation. No, instead they brewed a classic West Coast IPA, one that drips with Simcoe, Chinook and a modern dusting of El Dorado. As such, there’s grapefruit, a dank, weedy nose and resinous undertones, plus flashes of pineapple before a firm, piney bitterness and appropriately dry, bitter West Coast length completes the picture.