Beer Deeds Brewing Milk Bar: Blueberry & Raspberry & And Everything Under The Sun is In Tune 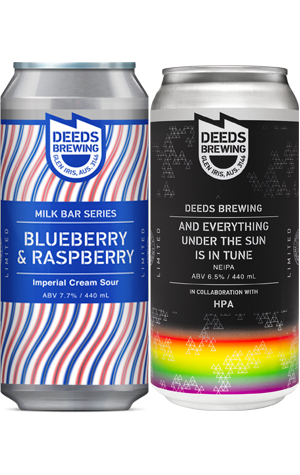 Sometimes you have to marvel at how breweries manage to keep on top of things. No sooner have Deeds sent over samples of two new releases than they're sending information on the next three...

As for the two in hand (OK, in hand, in mouth, can crushed, in recycling), Blueberry & Raspberry is part of their Milk Bar Series of imperial cream sours. No prizes for guessing what's inside (although you can add vanilla and lactose to the fruits). It pours a lovely crimson colour with a pink foam and, while I couldn't exactly pin down the character, I'd say it floats somewhere between fruit cordial, berry reduction, kids' lolly-flavoured medicine, and summery table red in terms of taste, aroma and texture. It's perceptibly sweeter more than sour with even the acidity presenting with a sweet edge, while the blueberries' distinctive essence acts to ground things a little.

The Pink Floyd-referencing And Everything Under The Sun Is In Tune is one of the beers chosen to herald Eclipse's formal arrival into Hop Products Australia's lineup. While not as big as many of Deeds' hazies, and with a dry-hopping rate of 9.5 grams per litre when, at times, they've gone above 40, it still comes out flexing. The promised mandarin is apparent from the off, segueing into a sweet, sherbety orange creme-meets-toasted nougat body. Rolled oats add to the rounded nature of the body, countered by a prickly, resinous bitterness at the end.

Next up following this fun-filled twin set: a dry-hopped saison, a California IPA, and an oat DIPA...