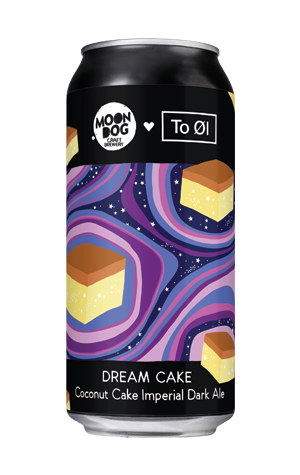 Given both breweries' past outputs, any collaboration between Moon Dog and Scandinavians To Øl could have gone in many a direction. Where this one has headed is straight for the patisserie. And how.

Dream Cake is tagged a "coconut cake imperial dark ale" and you're not left wondering how far they were willing to push things into cake territory. It's based on Drømmekage, a caramelised coconut cake from Denmark, and the brewers have gone big on the coconut, big on the metaphorical slice of dark choc fudge cake, big on the caramel swirled through its midst and poured over the top, big on the vanilla. Let’s just say it’s big. Really fucking big; not so much in booze – 8.8 percent ABV isn't huge by today's standards – but in impact and outright cakiness.

While the coconut catches your attention from the glass first, over time the caramel builds to a crescendo and dominates all else. It’s like the most OTT dessert you can find on the menu at a US diner, creating an experience like those where you're pretty sure you're stuffed already, but fuck it, a slab of dessert won't hurt that much, and before you know it you've sent yourself into some sort of calorific overdose delirium with a spot of ruptured stomach lining for good measure.