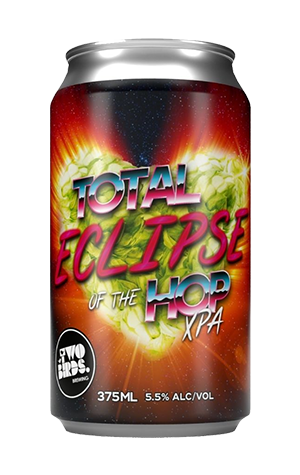 Two Birds are no strangers to the newly-named hop Eclipse or giving their limited release beers musically-inspired names and in November 2020, they've done both at once. Back in 2018, the brewery used the hops - then going by the name of HPA-016 - to brew a pale and hazy IPA named Uncharted. To celebrate Eclipse being given a name, now they've reworked that IPA recipe to brew a slightly more summery XPA and given it the Total Eclipse of the Hop (which coincidentally, is the same name of the article we wrote exploring the hop’s story).

In this beer, it definitely pushes out plenty of the Eclipse’s mandarin character and along with the fruit's flesh, it seems to add a slightly distinct note that’s more akin to the liquid that comes out of a mandarin peel if you squeeze a piece of one hard enough. Aside from that mandarin hit, Total Eclipse also turns around for a note of pine before finishing with a slightly bitter bite.