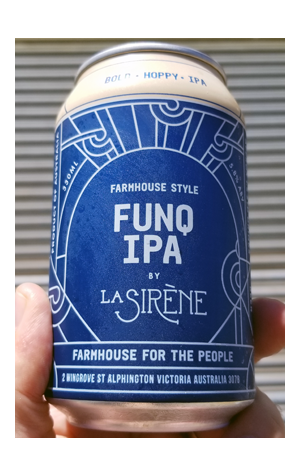 La Sirène founder Costa Nikias always said he'd never brew an IPA. But, like the team at Moo Brew and the late Sean Connery, it's a case of never say never again as FUNQ becomes the brewery's latest farmhouse can. That said, it's not your typical IPA so he could qualify on a technicality.

They've clearly thrown plenty of hops at this densely hazy beer, and they present themselves in a twofold manner: there's much in the way of sweet mango (the flesh closest to the seeds) and overripe pineapple, while there's also a fresh hop grassiness in the background of the aroma and contributing to the building bitterness. The brewery's house culture adds the faintest hint of Belgian IPA but the funk in FUNQ doesn't overwhelm, leaving you with a full-bodied IPA that stands apart from the crowd.

NB: These are the launch venues

It will be available more widely over time