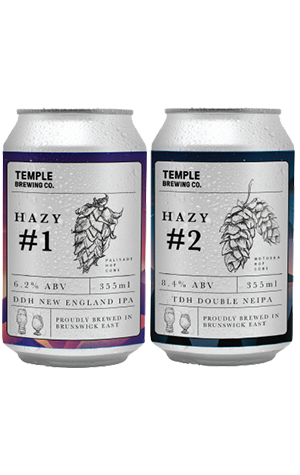 Having only released their first hazy IPA – the aptly named Last Train To Boston – towards the start of 2020, the Brunswick brewery has doubled down towards the close of the year with the launch of their Hazy Series. It's set to feature four variants, with different Temple brewers designing the recipes for each and having the freedom to explore what's a growing field of hazy sub-styles.

The first two come as a pair with Hazy #1 dubbed a DDH New England IPA and featuring the hops Palisade and Citra alongside Cryo iterations of Sabro and Idaho 7. That combination brings a mix of peach and nectarine while I also found flavours of gooseberry and kiwifruit in the beer’s lush, soft body.

The second release is a TDH Double NEIPA – and #2 isn’t just bigger on the booze from than its stablemate, it’s also far bigger on the hop aromas. The dry hop totalled 20 grams per litre and the use of Motueka, Cryo Mosaic and Galaxy bring a mix of flavours that move from mango to passionfruit, then onwards to a sherbety citrus and a bittering pine.

With two more hazies on their way, you have to spare a thought for the brewery's bookkeeper rationalising that hop expenditure...