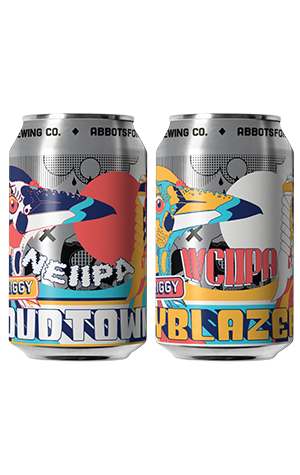 in yet another twin release from the Abbotsford brewery, Bodriggy have looked to hops and been exploring soft haze and dank bitterness with two big IPAs. Both come in at 8 percent ABV and both are made with the same trio of hops – Simcoe, Mosaic and Cashmere – while sharing similar malt bills before their paths diverge.

On the haze train is Cloudtown, which includes unmalted wheat and was fermented with kveik yeast. As well as pouring pale and cloudy, the beer gives off notes of lychee, peach and kiwifruit alongside some riper, yeast-derived pineapple esters.

On the darker and crystal clear side of things is the deep orange and deeply bitter West Coast style Skyblazer. Vienna malt and Gladfield's specialty offering Supernova help with the colour and richness. As well as creating a bitter end, the hops bring forth a burst of mango, joined by resin, pine, citrus and an oily quality in the finish.