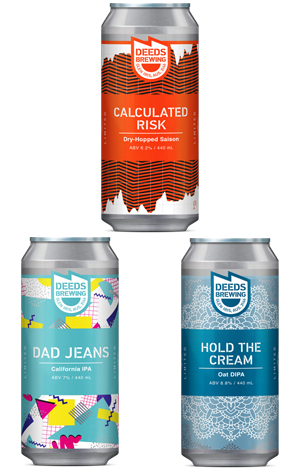 Understandably, Deeds have become known best as one of a clutch of local breweries playing hard in the realms of the hoppy, hazy and boozy. Yet, while I won't pretend to have tried all their very many beers, it's fair to say their rapid-fire release schedule heads into other spaces too, from imperial sours to stouts and lagers. And, on occasion, saisons like Calculated Risk.

The beer is so called as they're mixing Old (Saaz) and New World (Motueka – derived from Saaz) hop varieties with the farmhouse yeast strain. The latter contributes a little citrus, but really the two elements are less distinct entities, more a whole – one of a funky, herbal, borderline medicinal nature. There's a little malt sweetness too, under which the saison’s peppery dryness keeps things lean and texturally vinous like a dry white.

Dad Jeans sees them back in IPA territory, albeit of a more old school bent with a beer they're tagging a California IPA. That said, the 16 grams per litre dry hop featuring Strata and Mosaic ensures this out and out celebration of hops remains plenty fruity; with the malt stripped back, you're met with pithy, tropical aromas and little in the way of sweetness or body to get in the way of a palate-smothering, grassy, hop oil-derived send off.

Which brings us to the biggest of the trio, Hold The Cream, which does just that: they've released many an oat cream IPA in 2020, but here it's just oats, no lactose, at play with the mountain of American hops. The malted and rolled oats contribute their body-enhancing skills and there’s still sweetness at play, but it's more prickly than velveteen in texture. It means hops are very much driving this ship: tropical and green, herbaceous and hazy, grippy and lingering.