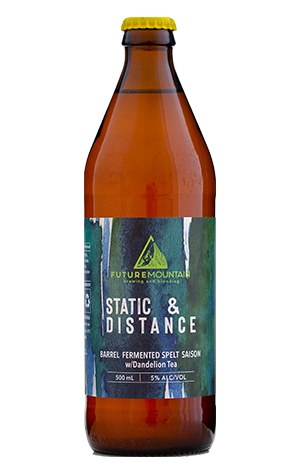 They tend to brew to the beat of their own drum at Future Mountain and the brewery and blendery's saison series that launched at the end of 2020 is pretty good evidence of that. Static & Distance aims to showcase the style's myriad moves and be an ever-changing evolution, with each release barrel-fermented but then embellished with unique ingredients and flavours.

The first is Barrel Fermented Spelt Saison with Dandelion Tea, which underwent primary ferment in barrel for eight weeks. The high proportion of malted spelt in the grain bill gives the beer a cereal character, while the dandelion tea was steeped in the brew kettle to add some herbal notes. It means there's a lot going with the beer but, above all else, it's an exercise in subtlety.

If you wanted to drink it in the sun and not really think about it you could, but delve deep and you’ll find soft florals, dandelion and chamomile, lemon zest, and a yeast character that brings to mind a loaf of sourdough. There's a touch of oak in there too and, while it's quite dry, the barrel ferment lends Static a creamy mouthfeel too. Hey, 2021: more saisons please. [I've been asking for that since 2011! – Editor]