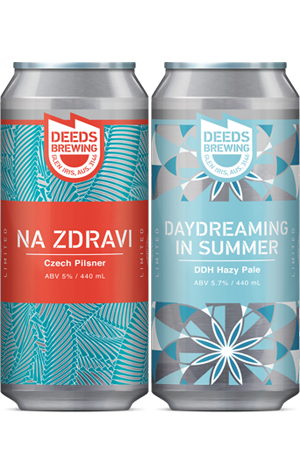 The division, schism, turf battle – whatever you want to call it – between the group of craft beer drinkers in awe to hype styles and breweries, those chasing the biggest ABVs, grams per litre, and calorific intake, and those clamouring for a greater focus on classic styles, balance and sanity has never been wider or more intense (even if the majority of humans will be totally unaware such a thing exists). As such, there's a danger you might think this write-up on two cans from Deeds – a brewery that's been delivering beers aplenty for those in the former category – is being wilfully obtuse. Why? Because one of the two cans is a Czech pilsner shorn of bells and whistles, and I can't remember a better beer from Justin Corbitt and his team.

Na Zdravi might not use Czech Saaz hops, but otherwise it's as much of a homage as you could wish for, with Kiwi Riwaka hops – a Saaz derivative – ensuring the beer possesses some of that familiar floral character and a broad, drying bitterness, while adding a layer of citrus to proceedings. Well balanced, clean and eminently drinkable, it's a crispy boi worthy of hype.

For Daydreaming In Summer, we're back in DDH territory, albeit at a lower ABV than most such Deeds beers. Very pale and very hazy, Ekuanot, Idaho 7 and Ekuanot Cryo ensure there's a tropical juiciness to the relatively light-on-the-palate beer, with a touch of grippy bitterness underpinning its soft texture.