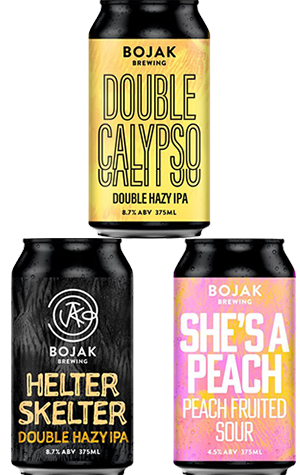 To celebrate their second birthday, Melbourne’s BoJak Brewing have brewed up three special beers to help mark the occasion. Starting what might be the least surprising and the most welcome for the Dandenong brewery’s fans, there’s a double version of their popular hazy, Calypso. Double Calypso has twice the amount of hops as the core beer and on opening it up, it comes across like it has twice the amount of juice content squeezed in too. From the moment it’s cracked, the beer spills out with huge aromas of mango and pineapple, along with some pithy grapefruit and a slight bite of bitterness on the back.

The second beer, Helter Skelter makes for an interesting comparison since it's also a double hazy, is an incredibly similar opaque pale yellow and has the same booze content of 8.7 percent ABV. It’s not quite a new beer either, with the brewery bringing it back for the birthday celebrations due to popular demand. While Double Calypso is mostly mango and pineapple, Helter is more nectarine, passionfruit and pulpy orange juice which shows that for hazies (and most beer really) the difference likes beneath the appearance.

That’s the case for She’s A Peach too, a fruited sour that again looks a little similar in that it's pale and unclear. But that's where any similarities end, with the beer's tart edge and peach flavours packing a bit of a punch and where a little sweetness towards the back, it's nudged towards dessert territory. Which of course makes it the perfect way to finish tasting a trio of birthday beers.

Available in bottleshops and direct from the brewery including special birthday packs.