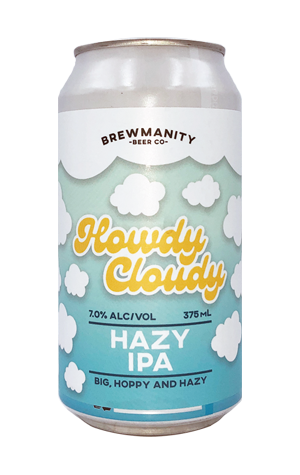 It's been a while between new cans from Brewmanity, the brewing company raising awareness and funds for Fight MND through every beer and event. But the return lands very much in the midst of the action today, with Howdy Cloudy a 7 percent ABV hazy IPA.

Brewed with Vic Secret, Huell Melon and HPA's newly-named Eclipse hops, it's orange in colour and hazy more than the cloudy of its name. Not only orange in appearance but noticeably orange-tinged in character too (well, HPA have promoted Eclipse as delivering mandarin). It reminded me of orange poppyseed cake, although also passionfruit sponge. Either way, what you have here is most definitely a meeting of sweet, ripe fruits and sponge cake; a creamy tropical trifle in a can, if you like.