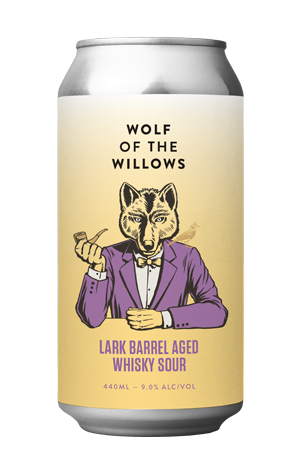 Now, I've had a fair few beers featuring whisky and sourness in some form. But I've not had one quite like this entry into Wolf of the Willows' ever-evolving collab series with Lark Distillery. It's fair to say, however, I'd happily have more of 'em. After all, when you check the label and background info upon completing your tasting notes, discover the beer is 9 percent ABV, and feel compelled to end said notes with: "Blimey!", you know you're onto a good thing.

Firstly, the background as I appreciate most people like to know what they're in for before buying / cracking a can, rather than diving in blind then reading up afterwards. An imperial blonde sour was used to fill leftover barrels from the 2020 Imperial JSP release that had been "re-seasoned" with whisky. The sour featured a touch of smoked malt, some lactose, and hand-picked and freshly juiced lemon and zest. After four months in oak, fresh lemon juice was added before canning, when it was dosed with nitrogen to recreate the mouthfeel usually provided by egg white in a whisky sour cocktail.

And now to the experience... The whisky truly leaps from the glass: fragrant and juicy, spicy and a little peaty (although that could also be down in part to the smoked malt). There’s a sweetness upfront on the palate, like spiced festive citrus, a lively acidity that’s refreshing rather than sour, then plenty more peaty, drying, woody whisky completing the circle.

It genuinely is a cocktail beer. I genuinely did not pick the near double figure ABV. Blimey, indeed.

Wolf of the Willows Taproom