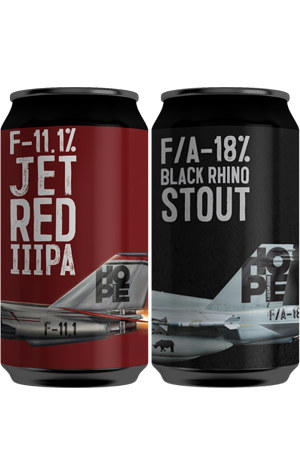 When it comes to these high alcohol heavyweights, Hope is not messing around.

The F-11.1% Jet Red IIIPA is a masterpiece. Like a fighter jet’s afterburner, it’s red at its core with orange flickering at the edges, but it somehow avoids emitting any harsh fumes. And there’s no turbulence in this ride – it’s smooth, smooth, smooth.

Thick like an oil slick on the tongue, the beer brings together orange rind and resin bitterness, ripe pawpaw sweetness, and caramelised sugar stickiness. If the team at Hope were trying to make jet fuel, they failed. This is boozy marmalade with a side of pawpaw liqueur.

As for the F/A-18% Black Rhino Stout, the Untappd reviews are a great place to see the effect this beast had on the people.

There are a few aviation references from Hollywood – “This thing nearly killed me. Black hawk down”; “GOOSE. Talk to me Goose. BOOZY as hell”. A number of reviews said this beer put them to sleep, or just plain old killed them. One had a problem with it because you “couldn’t drink more than one” (which I would have thought is a given since there are more than five standard drinks in a can). Another said this beer was “like defeating a Rhino in your face”, which I can only imagine was written immediately after consuming said standard drinks.

This beer is an experience in a can. There’s chocolate, there’s leather, there’s liquorice, there’s Port wine… but, really, words don’t do it justice. You have to experience it for yourself. Grab one, and for goodness sake, share it with a friend. If you don’t have a friend, make a friend. It shouldn’t be hard with this as an incentive.