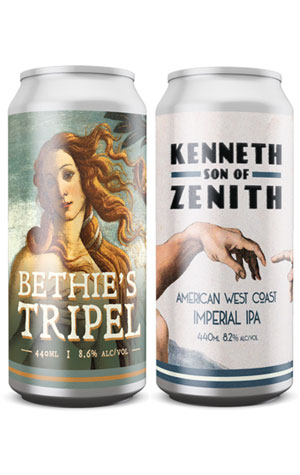 If you've grown up in the contemporary craft beer world, especially if you've got into beer over the past couple of years, hearing that a beer is hoppy will probably have you thinking of explosions of tropical fruit salads and opaque, golden-yellow pours. But highly hopped beers predate today's wanton extravagance, just in different ways and alternate expressions.

Head to Poperinge, Belgium's main hop-growing region, for example, and you'll be able to lay your hands on some hoppy Belgian ales; but instead of fruit bombs, you're more likely to be met with something dry, spicy and bitter, with those old school hop varieties often contributing less on the fruit front than the yeasts. That appears to be the case with Bethie's Tripel, a strong Belgian-inspired ale brewed in tribute to Hargreaves Hill co-founder Beth Walkenhorst. Pale and spicy with characteristics that take in white pepper, a drying herbaceousness, a minerality and a slaty riesling like vinousness alongside the Belgian esters, it's a reminder that "hoppy" has meant, and still can mean, more than hazy fruit bomb.

Of a more contemporary hop forward nature is Hargreaves' returning double IPA. Here, the caramel-giving specialty malts have been stripped back in 2020's Kenneth, Son Of Zenith, leaving you with a very different beast to past iterations: paler, much leaner, and a tighter expression of what a West Coast IPA can be. Like the Tripel, it's in part reminiscent of white wine, as if there were Kiwi hops in the mix (there aren't – it's all US varieties Amarillo, Azzaca, Belma and Centennial), with little in the way of sweetness, a herbal edge to the pithy, citrusy hops, some booze, and a finish that's dry more than bitter.