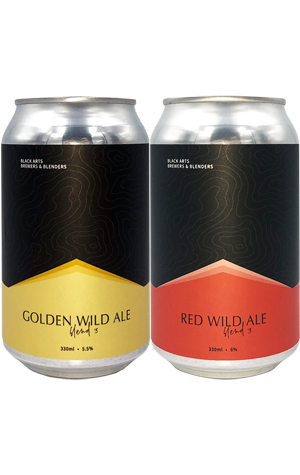 It's been fascinating to watch the transition of the local beer world from glass to can. As the process accelerated beyond anyone's expectation from the middle of the last decade, there were still certain styles that brewers seemed reluctant to put into tinnies, typically specialty beers like annual imperial stout releases, or funkier farmhouse styles – the sort of beers deemed worthy of showcasing in elegant bottles. But the passage of time has seen ever more make that passage, with small Melbourne sour beer specialists Black Arts now putting some of their blends into cans.

Among them are their flagship beers, now up to Blend 3. While the also-now-canned Bière de Coupage – which you can read about here – could be used to lure newcomers into their realm, Golden Wild Ale heads deeper into sour blend territory: behind enemy lines for the unsuspecting. It possesses a deeper, funkier, stewier expression of yeasts and bacteria reminiscent of Belgium barnyards, delivering a puckering acidity, oak aged malts, and a sweet, potent back palate prickle with the intensity of a Botrytis wine.

As for Red 3 – which brings to mind the Boombastic Baron Of Techno (no doubt to me and about two other people) – it's a cracking example of the Flanders red style for which I have a deep fondness. Pouring a deep, ruddy, mahogany red, it's a beer of real depth: the rich and aged specialty malts, the cherry like fruitiness, the bracingly spiky acidity, the creamy oak, the chocolate attempting to bring a sense of levity... Banging.