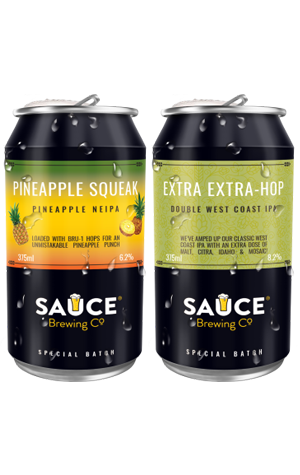 Brewed first for Beer Cartel’s 2020 Advent Calendar – then immediately re-brewed as there was demand for wider availability – Pineapple Squeak joins the line of fruity NEIPAs from Sauce. It’s been supercharged with Bru-1 hops, known for their pineapple character, then topped off with some pineapple extract to double down on that flavour. It’s now all but impossible to discern where the hops leave off and the pineapple picks up, because the whole thing is one massive blast of pineapple – not sharp and bitey, but smooth and sweet. We’re talking Pineapple Fanta. We’re talking those little yellow and green jelly pineapple lollies. We’re talking when you fry a slice of pineapple and the sugars caramelise and it goes all soft and sweet.

There’s also some piña colada vibe going on, but considering there’s no coconut or Sabro hops to be found it’s a mystery to me where the coconut character is coming from. Perhaps the beer’s smooth mouthfeel and my own yearning to go on a holiday to a tropical island are playing tricks on my tastebuds.

The brewery’s core range West Coast IPA Extra-Hop Sauce has remained a bitter bulwark against the waves of juicy and hazy IPAs that have flowed through Sauce’s brewhouse (and through the entire industry) in recent years. Now Sauce are sending in a wave of reinforcements in the form of Extra Extra-Hop Sauce, which takes the Extra Hop-Sauce recipe and just cranks it up. More malt body. More booze. More of the same hops: Citra, Idaho 7, and Mosaic. The flavours of the original are all there, all intensified, but still all held in balance. The pine and the sweetness hold each other in check; the citrus and tropical fruits remain firm friends with the stern bitterness.

Most double IPAs fall into one of two categories. Either they’re hop syrup bitter explosions that blow your face off (which can be a wonderful thing). Or they’re incredibly flavourful IPAs that have you repeatedly checking the label because you can’t believe they’re as strong as they claim. Extra Extra-Hop Sauce is the latter.