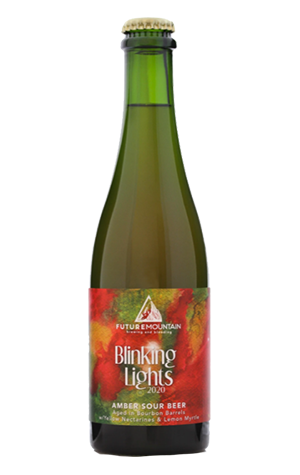 It’s only the second Christmas Future Mountain's brewery and blendery has existed and already they have a festive tradition: using bourbon barrels to create a light but complex amber sour beer. Last year, Blinking Lights featured apricots and cinnamon; this time around, it’s nectarines from the Yarra Valley and a small dose of lemon myrtle which are destined for the Christmas table.

After six months of maturation in Future Mountain’s puncheons, the beer was added to Buffalo Trace bourbon barrels after they’d been emptied of the imperial stout Silhouette. It provides for a beer that might share similar spice characters to many Christmas desserts, yet is a far more appropriate for our weather than the richer treats created in the Northern Hemisphere. Along with some rather ripe and juicy nectarine, there are soft notes of coconut and vanilla from those bourbon barrels, while the beer’s funky and sour edge acts as a real refresher that would – without a doubt – help clear space and allow you to shovel down another slice of Christmas pud.