Beer Burnley Brewing It Is What It Is, Raspberry Sherbet Gelato & Julebryg 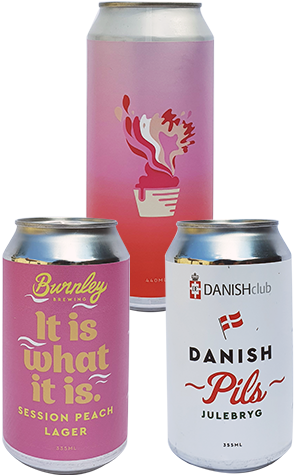 As diverse as the modern craft beer landscape is, it’s still not often we receive two very non-traditional lagers and one fruit-filled kettle sour at once from one brewery. Melbourne’s Burnley have managed to do just that, however, and let’s start by introducing what may well be the most straightforward of the trio: a session peach lager (yes, that's the most straightforward).

It Is What It Is is a lager made with, you guessed it, peach, with a name chosen to sum up the year we've been through; coincidentally, the phrase was also our final thought on the year. By and large, the beer in question is very much the same kind of dialled-in lager people might expect from someone who learnt to brew in Germany. The peach is added with the lightest of touches – I picked up none on the aroma while, to taste, the stonefruit is more akin to what brewers can elicit from hops than that found in lactose-laden fruit sours.

Speaking of which, meet Raspberry Sherbet Gelato Berliner Weisse, a collab with the Brunswick Beer Collective podcast crew and Collingwood good beer haunt, Beermash. The bright pink beer is so different from the lager that you may wonder how you’d explain to a newcomer that they’re both the same form of booze. That thought is only amplified by the manner in which it captures the essence of raspberry sorbet: tart thanks to that berry kick, yet with a fluffiness that faithfully recreates ice cream in a glass.

Back into lager territory we head for collaboration two, this time with Melbourne restaurant Denmark House, for a Christmas-spiked amber lager named Julebryg. The name stems from the traditional Danish Christmas brew and the beer features star anise, clove, vanilla, cinnamon and nutmeg. And, with all those ingredients at play, it's impressive how well the beer manages to be retain a lightness. It pours a dark amber, has all the spice notes of the aforementioned lineup, plus some cherry character, yet it’s worlds away from a modern pastry stout or even from being heavy in any sense.