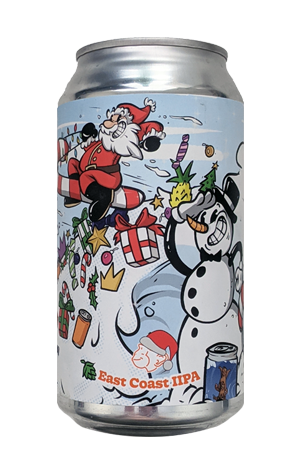 Santa’s Secret Spot is the final instalment for2020 in Cheeky’s Surf Break Series, and it’s by far the biggest; as national sales manager Brendan Day puts it: “The beer is something that we wanted to do for a while” before adding with a laugh: “And I love a big, dumb hazy.”

And that's what it is, but one with technique underpinned by incoming head brewer Ryan "Knobbsy" Knobs' growing prowess on the Vasse kit; Brendan again: “It’s the most different of what we’ve done in the series so far.”

The seasonal hop acrostic features Simcoe, Azazzca, NSH107, Tetra and Azacca – geddit? – alongside a combo of others, which delivers something akin to a gourmet pavlova topping in beer form. There’s passionfruit, guava, ruby grapefruit, orange, ripe and green mango, plus pine making themselves known through the dense tropi-citrus vibe, which runs smooth, with some building booze warmth.

And, while the liquid is important, the label cleverly brings the series into the modern Australian Christmas, with Santa at his secret spot, and a clever meta-throwback to a previous release. Santa’s Secret Spot is playful inside and out.