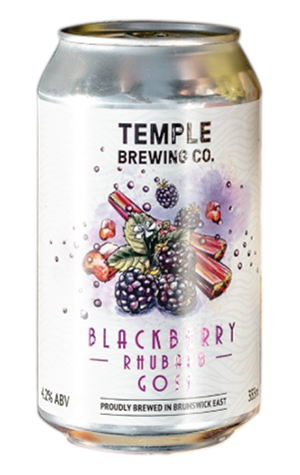 Every time I visit my parents in South Gippsland, I can’t leave without my dad offering me some rhubarb. Sometimes it’s a few stalks of the stuff, often it’s part of the plant’s crown; with the assertion being that I should really be growing it in my own garden. It’s not often I’ll leave with any because while I quite the stuff, I rarely know what to do with it. Sure, put it with apples and make a crumble but I did that twice during Melbourne’s endless lockdowns and that was quite enough.

Temple Brewing do know what to do with it: put it with some berries and make a sour beer in their Blackberry Rhubarb Gose. Pouring a colour that’s somewhere between purple and pink, the rhubarb is a little more distinct than the blackberry, which works well with the beer’s tart side that makes it so refreshing. The blackberry on the other hand, adds a touch of sweetness and juiciness which makes me think I should have been using rhubarb and blackberries together all along. Fortunately, the family home has plenty of those too...

If seltzer’s more your speed, Temple also has a Shikuwasa & Ginger Alcoholic Seltzer out now, which uses the same small citrus fruit found in the brewery’s Okinawa Sour.