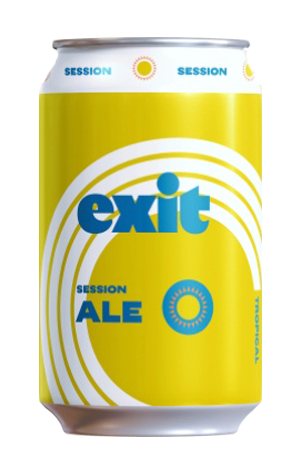 If you were to measure the size of operation to awards and trophies ratio of the country's brewers, Melbourne-based Exit Brewing must be up there with one of the best. They've won AIBA trophies for their Amber and Stout, recently claimed Stout Brewery Of The Year at the Melbourne International Beer Competition, and have notched many other golds along the way. Among the latter was an AIBA gold for beer #021 in their limited release series, AKA SXPA, and that's been the starting point for this addition to their core lineup.

Released at the start of summer 2020/21, in cans that couldn't be much brighter and sunnier, it's a mid-strength pale ale that does just what you'd want of such a beer. Indeed, the liquid inside is even brighter than the cans, with a clarity that's quite shocking in these hazy days. Citra, Mosaic, Simcoe and Cascade combine in easy-going tropical, lemon citrus fashion, the malt base is crisp, there's a slightly resinous bitterness that wouldn’t be out of place in a 4.5 percent ABV pale, and it finishes nice and clean. Job done.