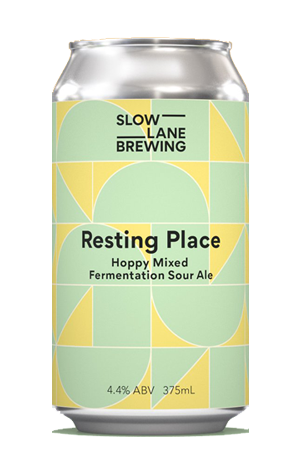 Slow Lane said from the beginning they were keen to experiment with different kinds of yeast, and Resting Place is a shining example of that.

This beer was soured, not by adding lactobacillus or other souring bacteria, but by a strain of yeast called Lachancea, which naturally produces lactic acid during fermentation. And since Lachancea was first discovered on a tree in a graveyard†, the name Resting Place seemed appropriate.

But, while there’s a slight earthiness to this beer, which has my mind scrambling to make some kind of turned earth or gravedigging joke, honestly I just want to steer away from cemetery references because this beer is full of life.

Lemon peel and pith on the nose give a limoncello vibe that had my brain wondering if Resting Place would be sweet or syrupy. But this is no digestivo; instead, it’s sour and fluffy and dry as a bon-… well, just trust me, it’s very dry. A fruity strain of Brettanomyces mingles with the bitterness of Mosaic and El Dorado hops which, usually so familiar, play a new role in this sophisticated, zesty sour that simply evaporates off the tongue when you’re finished.

† WHO WAS LOOKING IN A GRAVEYARD FOR THINGS TO PUT IN BEER??