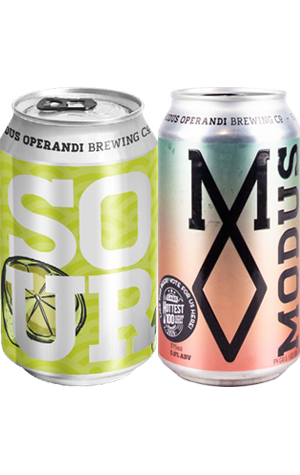 Modus Operandi are on a mission to put a shot of Mexican good times into your glasses this summer as their Sour series returns with a Margarita-inspired drink. It's an inspiration a fair few brewers have turned to over the years, and here Sour 02 leans heavily into the fruitier side of the cocktail. Indeed, so prominent is the citrus character, it reminds me as much of the glasses of lemonade and lime I used to enjoy as a kid with my bitter lemon-drinking grandad as it does the salt-rimmed, tequila delivery system. It leaves you with something less sharp and salty than a Margarita, more a refreshing fruit drink for summer sessions.

If you're a fan of Modus Operandi – or GABS – you'll likely have come across Lost In The Fog before as the hazy XPA was previously found in the festival mixed packs as well as on tap at the brewery. Popular demand has seen it return with a new look (and labels including a shout out for votes in the Hottest 100) but the same appeal: lime forward, lifted tropical hops, soft on the palate, easy-drinking and undeniably tasty.