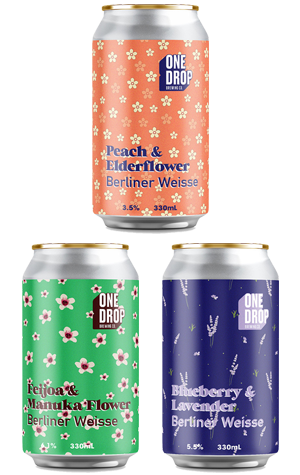 One Drop have been known for their fruit sours since they opened, but now they’ve started their Fruit & Flower series of sours to get bees puckering their lips as well.†

The first is Peach & Elderflower, and it doesn’t waste any time introducing you to what's in store. There’s a pungent hit of funk on the nose with the peach, but then the first sip is all juicy, tart peach with the lightest floral whisper in the distance – no funk here. The flavours cling to all parts of your tongue, like those anxiety blankets Facebook keeps advertising to me for some reason. When you’re done, the empty glass just smells like sweet, sugary peach. But don’t you lie to me, glass. I know you know it was a sour beer. I was there.

Next off the ranks is Feijoa & Manuka Flower. I’ve never eaten either a feijoa or a manuka flower, so I’m on the back foot right from the get go here (though I may have encountered a scented candle that smells like this). But I don’t think anything would have prepared me for the appearance of this one. It’s a milky green, like a smoothie you’d drink on a yoga retreat – perfect for catching people’s attention on Instagram. The sour is punchy, with 6.1 percent ABV to heave it along, and there’s a slightly honeyed, earthy and powdery petal flavour, like flowers straight from the garden. I’m also fairly sure Luke Skywalker drank this beer in The Last Jedi.

Landing back on earth, the Blueberry & Lavender is a return to the familiar when it comes to fruit sours. Its lovely amethyst glint exudes blueberry from a distance, Ribena-esque blackcurrant from closer, and lavender when you stick your face right into it. The berry and florals flood together as you drink, but it’s somehow still clean on the finish. And maybe it’s just the Ribena talking, but the berry juice smell makes me want to stuff my face with sweets and jump on the bouncing castle 'til I’m sick.

† I Googled: "Do bees have lips" and was met with, "The bee doesn't have lips like you and I. Instead she has mandibles. They're like two hinged gates that open and close at the middle ... Bees need long tongues so that they can reach into flowers to where the nectar is." We care about ongoing professional development and educating readers at The Crafty Pint.