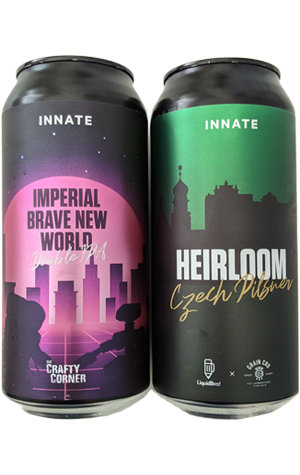 Innate's collab with The Crafty Corner references someone named Captain Dick, but we’re happier focusing on Huxley’s dystopian novel of its title. Brave New World, initially a parody inspired by a future offered by the Industrial Revolution, soon took on a life of its own, becoming one of the world’s best known, and most highly regarded, novels. Now in the Fourth Industrial Revolution, we grapple algorithms not steam, but the cultural impact is equally potent.

But, as this is a beer publication, let’s leave the meta concepts for a moment. Leaner than expected, yet with a taut muscular approach in which passionfruit dominates and sweet, ripe mango supports amid a general tropical vibe. The clean, direct, bitter punch tarries, with booze remaining tight by imperial standards.

Innate’s Heirloom series explores classic and, perhaps, overlooked beer styles. Here, in conjunction with Cellarbrations Carlisle and Vic Park plus LiquidBred, they deliver a very off trend Czech Pilsner, before proclaiming it “the king of all beers”. And based on this expression it’s a hard statement to argue with.

The Czech Pilsner balances a bready, classic pils malt base, floral-lime, light spice and lengthy, grassy dryness that lifts the listed 35 IBUs through a fine, tight carb. Elegantly constructed, and befitting royalty, this Heirloom’s only concern is its limited release.