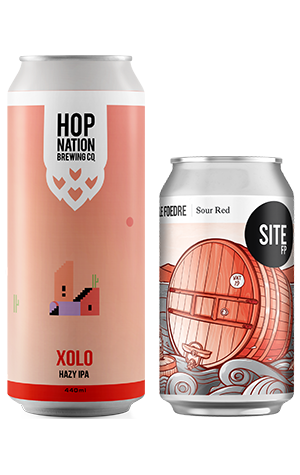 Hop Nation have welcomed in 2021 by taking the hazy world the Footscray-based brewery has spent years exploring in a slightly new direction. Xolo is a hazy IPA where the malt-bill is based on corn and along with Sabro, Galaxy and Mosaic, lime zest and mango were used in the brew too. That lime zest really makes its presence felt; adding a tart citrus hit which brought to mind a particularly tart mandarin before more classic hazy flavours of mango and yellow nectarine and a biting bitterness finishes the beery fiesta.

Out at the same time is a Site Fermentation Project beer with a particularly strong focus on provenance, Single Foedre Sour Red, that follows a blonde Single Foedre that was released in September 2020. The beer can traces the history of the big barrel (known as VAT 19) with significant detail, describing how it was built by C A Schahinger in South Australia and first filled with wine in the Hunter Valley in 1997. Now that one foedre is being filled with yeast and bacteria to make beer that's particularly acidic, with Sour Red’s tartness being quite bracing. That tartness is balanced out by rich malt flavours that are befitting for a beer born in a barrel with an equally rich history with notes of cherry, oaky vanilla and balsamic vinegar all blend together for one complex tin.