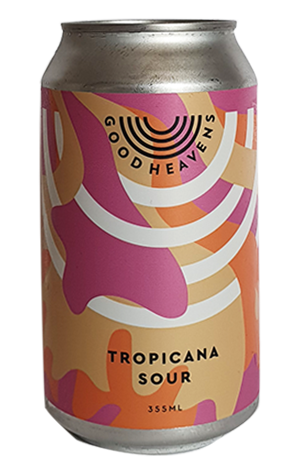 La Niña might be assuring Melbourne’s summer isn’t as crisp as it can be but there’s still been some blissful days for drinking in the sun and hopefully, February will bring us a few more. That’s what Burnley Brewing and Good Heavens are counting on with their collaboration Tropicana Sour, a beer designed to be cracked on that Melbourne bar's rooftop and anywhere else there's sun which, at the moment, seems like any other state.

It’s towards the lighter end of the sour scale, with the tartness kicking a little more like you'd find it in a juice over a beer and really, that’s the best word to describe Tropicana Sour. It pours yellow and opaque like OJ from a hotel lobby, while on the fruit front it’s a combination of mango, pineapple and orange that meld together to help fight back against the sun. If it turns up.

NB: The beer is being launched at Good Heavens on Saturday, January 30 from 3pm and if you turn up in a party shirt, the bar will give you a free beer.