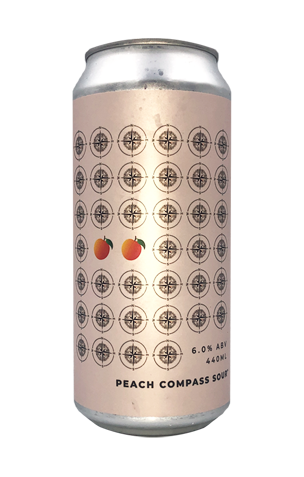 When it comes to contemporary, fruit-laden sours of the non-barrel-aged or blended variety, they're typically intended to be cracked and poured cold, although that doesn't appear to be the best approach with Braeside's limited release Peach Compass Sour. When first encountered straight from the fridge there was an element within the aroma I wasn't expecting, something akin to the sweet, bacon-esque smokiness you find in the rauchbiers from Bamberg (or the Frazzles chips from the UK), albeit not as prominent.

Left to warm, however, it appeared to set course for the sort of destination my palate had been anticipating from a 6 percent ABV, peach puréed sour. By that stage, the fleshy peach characters had come to the fore, alongside a little fruity hop character, and a cleansing acidity.

A tale of the unexpected, perhaps.