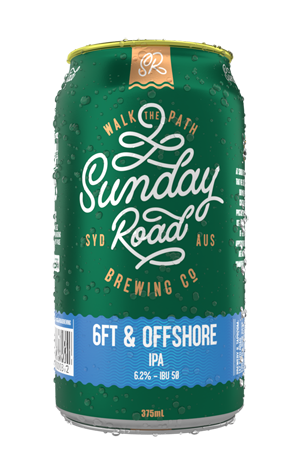 How often, when you’re looking for a refreshing beer, do you turn towards an IPA? Or, to put it another way: how many IPAs have you had that are flavourful, but are also refreshing and sessionable? Not often, and not many.

6ft & Offshore is a zippy thing. At first impression, it seems like a standard West Coast IPA - clear in the glass from spending time in bright tank, and bringing punchy hop character on the nose in the form of candied orange and mandarin zest tied in with some some mango and pineapple chunks. It reveals balance as it hits the tongue, with malt sweetness that can both withstand the hops and also amplify them, carrying pine and resin across the palate.

But it’s at this point you realise just how easy to drink 6ft & Offshore is. With 6.2 percent ABV and 50 bitterness units, this IPA should smack you around as much as any other, but it doesn’t. The alcohol and bitterness are just gentle undercurrents. It’s smooth and sessionable and, yes, refreshing. I could make some comment about it being "dangerously drinkable" or compare it to a rip in the surf threatening to pull you under… but that would imply you should avoid this beer. You shouldn’t.