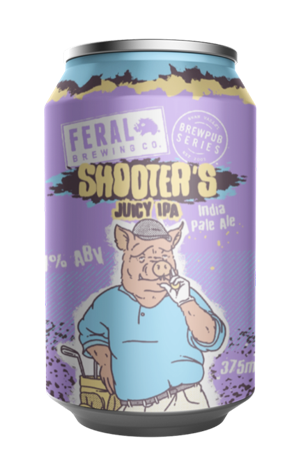 Shooter’s was originally a draught only, 2018 GABS Festival release, one which may now be seen as a form of proto-oat cream IPA, although it's not labelled as such here. In the fickle and increasing ephemeral beer world, a beer like Shooter’s should have come and gone: a sweet fancy, stuffed with multiple breakfast cereals, and referencing an Adam Sandler vehicle whose moment was likely partially shared with increasingly-stained shoes on the wobbly walk back to an equally wobbly table inside the Melbourne’s Royal Exhibition Building at said festival.

Shooter’s was a folly, albeit a well made one, designed for a 80ml serve of glory before the next flight of whimsy. And more beer-stained shoes. Simon Thai, however, had other ideas.

The Perth beer retailer’s near two-year campaign to reinstate a beer which stole his heart began with occasional comments on social media posts – a lone nut if you will. Then others commented on his behalf, tagging him in what became an ongoing playful dance between Feral and Mr Thai, as momentum continued to build until the momentum became too great to ignore.

At last, for Feral’s first 2021 limited release, the smooth, sweet-leaning and tropically-hopped 7 percent ABV delight has returned. Needless to say, Simon is quite happy.

And from the brewpub, COVID restrictions permitting