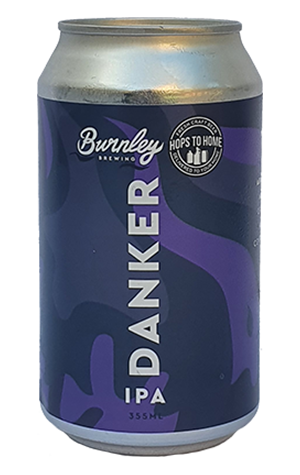 In 2020 Burnley Brewing and the team at Hops To Home teamed up to brew Dank and in 2021, they're back with an IPA that's even danker and called, um, Danker IPA. The series is a showcase of the flavours that were more commonly found in IPAs during an earlier time in the craft beer revolution, when America's "Three Cs" were brewers favourite hops.

Danker doesn't just taste like a beer out of time but looks like one too with its dark orange, borderline red colour isn't a sight you'll often find in IPAs. The beer doesn't just contain merely three hops either but five of them: Columbus, Citra, Centennial, Cascade and Chinook. It's a combination that creates an aroma and taste that's akin to walking through a pine forest, where there's an enveloping but difficult to define woody and earthy notes. There's also a softer touch of marmalade and pithy grapefruit that leans into the beer's softer caramel notes and a finish that comes across so bitter you do have to wonder where Burnley will take Dankest.